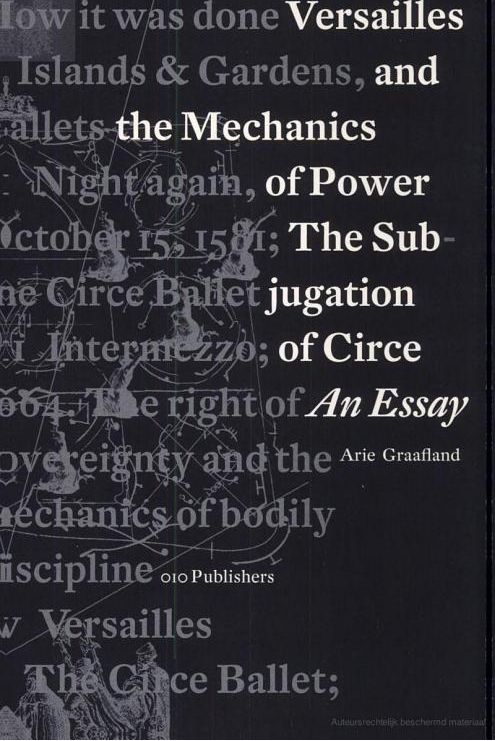 Versailles and the Mechanics of Power (010 Publishers 2003) explores the significance of the palace and gardens of Versailles. Graafland´s exercise consists of superimposing the choreography for the `Balet Comique de la Royne`of Balthazar de Beaujoyeulx upon the somewhat later gardens of Le Nôtre and the French Sun King. Avoiding a merely visual logic the author analyses the geometric character of the human body in that ballet and compares layout and ballet as a mechanics of power in an early symbolic state. Drawing on the many books and essays on Versailles, the author has added the ballet structure, a framework that tells us about the sometimes hidden but mostly very explicit desires of this period. These in turn tell us not only about the gardens and ballet but even more about French society at that time. Completing the book is a set of analytical drawings which give us both the layout of Versailles and the choreography of the ‘Balet’, explaining the mechanics of bodily discipline in the 17th century. Versailles and the Mechanics of Power is the second book by Graafland to address the role of the human body in architecture. The first, Architectural Bodies, deals with work by contemporary architects. Both books are firmly rooted in architectural criticism.