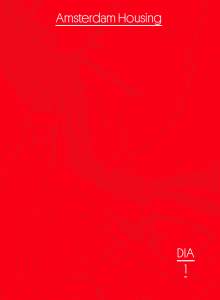 The book embodies two academic year’s work of analysis and design at the Dessau Institute of Architecture (DIA), part of the Graduate School of Architecture of Anhalt University, with its focus on critical reflection and implementation of a specific initiative centered on the city of Amsterdam. Till so far Amsterdam has mainly focused on housing projects for its waterfront, and is still staying away from prestigious office architecture alone. At its waterfronts you found mostly industrial sites, which formed a barrier between the water and the housing areas that have been there for more than a hundred years now. At this time there is a global plan providing 7000 houses (15.000 inhabitants). In the end there should be about 13.000 new units. In the sense of jobs, there should be an increase from the 8000 jobs right now to 22.000 in the future. In the period 2010-2030 Amsterdam planned to build 50.000 houses more, a building program which has been stalled today. The framework for this is the so called Randstad or Delta Metropolis. The main research question of all this is still; how do we assess contemporary urban plans and contemporary culture?

More and more emphasis is placed on the complexity of space, while the notion of hierarchical structures is disappearing. Instead, we are confronted with ideas about networks, streams of information, knots, and a space that is no longer to be controlled or planned. In reality, we do not (yet) possess the proper terminology to label this process. Both Studio´s looked at the city as an urban entity which is part of a larger and encompassing Randstad urban megalopolis.  More specifically, the first MSc 2 Studio on Amsterdam North with Heidi Sohn, assisted by Gerhard Bruyns (who later on supervised the Jerusalem Studio) was a research and design project which attempted to access the structural layers of Amsterdam. The studio methodology was developed at the Architecture faculty of TU Delft, in the Delft School of Design (DSD), called Urban Asymmetries (UA). The DIA project commenced with the traditional tools ascribed to reading city structure before inverting the traditional narrative to include other ‘variables’ (economy, social structure, labor forces and global markets) as part of a revised explanation what city form is as well as the intricacies of its internal relations. The studio focused on the historical development of the city of Amsterdam, and in particular the northern part which has been an industrial area and garden city for a long time. Income levels are lower than at the opposite side of the IJ Bank, the old city of Amsterdam which was always more attractive for smaller businesses and high end housing. What sets this UA methodology apart from many other studio´s is the analysis where economy, social fabric and the qualification of labor is not considered an external ´variable´, but the immanent force along which lines the urban condition develops. It means an in depth study of the development of the housing stock, the urban fabric, the many smaller workplaces, income levels and population characteristics. But most important was the time based counter strategy which should safeguard a certain resistance or autonomy against global influences in the sense of current urban waterfront development. A development which is actually taking place this very moment in high end housing and cultural industries. All texts in the first part of this book were written by MSc 2 DIA students during the course.

The second Studio’s MSc 3 and MSc 4 were organized with David Mulder and Max Cohen de Lara (XML Office Amsterdam) and focused on the Houthavens, one of the last urban waterfront areas in the city of Amsterdam that still has to be developed. Most of the IJ Bank development in Amsterdam has been accomplished, but right now we are in a different condition. Economic development is coming to a halt, conditions in the real estate market have changed, and mortgage conditions from the banks are more severe than before 1998. Limitations of municipal investment ask for inventive and creative solutions in the simulated design studio on Amsterdam’s waterfront. In this case we focused on an ‘what if’ situation, what if the current proposal from the municipality was put aside and students had to find other options for development. This resulted in many different proposals; sometimes centered on communal living conditions, in other cases on massive development on the (social) housing stock to create more living space, a proposal for an artist community combined with housing in the water of the Houthavens, and an apartment block influenced by Lissitzky’s Wolkenbügel (1924) for Nikitsky Square in Moscow, to name just a few. In all cases urban plans had to relate to the Spaarndammerbuurt, in many cases an opening up the area to the water of the Houthavens.

In all three Studio’s we fully realized that the conditions the architect has to work with come from the outside: programs are determined beyond the control of the individual architect. It means that students taking these Studio’s had to study structural conditions for urban development, the design process itself can only be a critical intervention in a dynamic complex urban condition. This second studio was supported by Isabelle Doucet who offered a workshop on housing in Berlin explaining both historical and contemporary conditions in comparison to Amsterdam.

This extended and critical approach brings us to the following questions: which instruments are actually valid for use in analyzing a design, and which ones have become obsolete?  In other words, can composition, semiotics, linguistics, philosophy, critical theory, hermeneutics or phenomenology still help us discover the value of a design?  Or are we basically in the position of a post-modern universe were all these disciplines are easily used to dress up design? We have to realize that most design questions formulated in architecture schools have to do with the how question, the question how to make it. The other question is however the why question.  For more than a century the issue in the social sciences. Since architecture and urbanism are social constructions of reality, they have to deal with the why question also. Why is this design so important, why is it any better than the other one? The textbooks in education that deal with these questions are sometimes drowning in a sea of unexplained examples and procedures. The best ones in this field relate to architectural examples as a social construction of reality.

In contrast to the other technical faculties, architecture schools are dealing with society right from the start  – we are not only discussing cause and effect here (as might be the case in technical sciences like physics). We deal with a material concept  that has a double connotation, both technical and social. Technical in the sense that materials and procedures of architecture itself form a rich cultural matrix, capable of sustaining dense intellectual argument without much recourse to concepts and language borrowed from other fields. Social because we are dealing with the social construction of reality which asks for a better understanding of the forces driving our society.

At the architecture schools, the criteria are not only technical; they are also – in fact primarily – societal. We are not suggesting that social relevance is not also important at the other sciences, but perhaps only as an effect, not from the outset as ‘taste’, ‘value’, ‘aesthetic quality’ or ‘beauty’ they all inform and form the design.  The design process takes place in an open and dynamic system, one which is, in continuous flux:  that system is society itself.  There are only limited opportunities to ‘isolate’ the system as in physics. The conclusion might be that architecture and art are practices, not sciences. The construction of the natural sciences aspire universal application. Buildings and plans have a far more unique character however. The conditions the architect has to work with, come from the outside, programs are determined beyond the control of the individual architect. Or, as Stan Allen has put it: the practice of architecture tends to be messy, and inconsistent precisely because it has to negotiate a reality that is itself messy and inconsistent. And may be, it is better to drop the conventional theory/practice distinction, as Allen has put it, and distinguish broadly between practices that are primarily hermeneutic – that is devoted to interpretation and analysis of representations, and material practices like urbanism, ecology, fashion, film making and gardening. The vector of analysis in hermeneutic practices always points toward the past, whereas material practices analyse the present in order to project transformations into the future. In this sense too, the Amsterdam Studio´s distinguished themselves from the sciences, where the function of the ‘laboratory’ is fundamentally different. One of the major difficulties every studio interested in the hermeneutic disciplines will confront is how to ´translate´ critical thinking into the design process. The first MSc 2 Studio read work from Sassen, Brenner and Lefebvre. It gave them an in depth knowledge of our current society, but design is by definition forward looking; how do we ‘implement’ this knowledge. There is no straight line here, we could only opt for piecemeal engineering by abandoning the overall grand design. Urban plans in this book are strategic plans, not always to be realized in full, they have to be strong enough to resist the often fragmented city politics, the real estate market with its own dynamics and changing preferences. Assessment of plans remains a difficult issue too, since we consider design as a practice with a unique character in time, we can only ‘measure’ along the initial procedures and ideas of the designer.

In one of the issues of Harvard Design Magazine, Michael Benedikt in his Introduction shows that the qualifications of taste we deal with in education have considerable class resonance’s.  Try this experiment. Sit in on a design review at an architecture school and close your eyes. Listen carefully to the terms used in praise or criticism of the work being presented. You will find that most of the terms used are virtues more appropriate to people than to buildings. The design is (or is not) honest, strong, respectful, critical, graceful, sensitive, interesting, careful; has integrity, is not wasteful, is intriguing, inviting, bold, challenging, practical… Call it literary personification, as Benedikt says, the point is that certain virtues are laid out and judged – the selection of issues and virtues have considerable class resonance’s. Why this example? Not because we can get rid of these judgements. Or replace them by so called scientific concepts in a mimicry of the natural sciences. What is entirely possible is that we learn to distinguish between these virtues and their different social backgrounds and relate them to the structural economic and social conditions of our current society. From there we start to see the relevance of the design work as an intervention in an urban condition at Amsterdam´s waterfronts.

We hope that the reader of this book will take time to read it, the design work is part of a wider extended analysis needing words to explain the research and design results embodied in this compilation.